The Alliance-Union universe does not include any "artificial gravity" technology. Ships and stations must use rotation to provide gravity; this directly affects the design of both. Star stations all use a torus design, with docks at the outermost level, and resident quarters, administrative functions, etc. at inner levels. Manufacturing, hydroponics, etc., are typically located at the innermost areas of the station, particularly for those facilities requiring little/no gravity.

Major star stations share a common design, with 10 levels. Due to the size of FTL starships, docks occupy multiple levels. Docking cones are at approximately level 8; the dock level itself is approximately level 9. Access to docked ships is from the level 9 dock level, but the dock area is two levels high. A level 10 is below this area, consisting mostly of machinery spaces. Generally, starships dock on one side of a station, with auxiliary docking facilities on the other. Stations shift liquids (fuel and water) to manage the changing center of gravity caused by ships docking/undocking.

The dock area is designed to fulfill all the needs of visiting ships, including access to bars, hotels ("sleepovers"), warehouses, etc. Although facilities may actually occupy multiple levels, the general approach is to view the dock level as the entrance or ground level. So, a multi-level sleepover may occupy levels 7, 8, and 9, and would have access to all three, but from a visiting crew perspective, the ground level would be on level 9, with two levels above that.

Stations sharing a common design include Pell, rebuilt Mariner, Viking, and Esperance. Although the design is similar, demand for additional space results in construction unique to each. However, the layout of the docks is the same.

Major star stations have the capacity to dock over 25 ships simultaneously.

By contrast, the Hinder Stars stations are much smaller. When built, such stations would generally expect a single, sublight starship at a time, typically only every year or two. As an example, Thule station is capable of handling only a single starship at a time. Venture station can handle approximately 4-6 starships, plus insystem vessels. 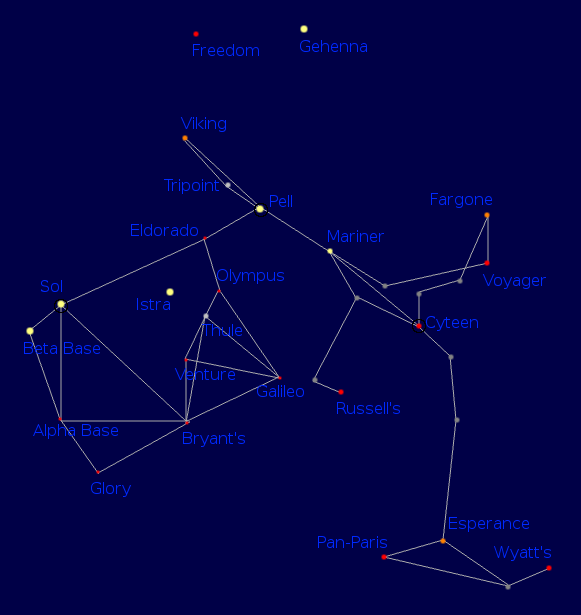 Note: True distances may not be apparent in the star map, as stars may lie far above or below each other

Retrieved from "https://alliance-union.fandom.com/wiki/Star_Stations?oldid=4165"
Community content is available under CC-BY-SA unless otherwise noted.