Norway, captained by Signy Mallory is a key starship in many of the Alliance-Union novels.

Norway is a troop carrier, she also has four "rider" ships. Riders are not jump capable but are small, agile, and heavily armed. They travel through jump docked with Norway.

Norway was one of the ships in the original Earth Company Fleet, which defected under Conrad Mazian to form the Mazianni Fleet. During the events of Downbelow Station, Mallory broke with Mazian and Norway became the first warship of the newly created Merchanter's Alliance. 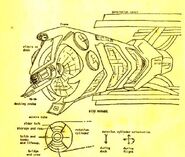 Add a photo to this gallery

This article is a stub. You can help Alliance-Union by expanding it.

Retrieved from "https://alliance-union.fandom.com/wiki/Norway?oldid=4146"
Community content is available under CC-BY-SA unless otherwise noted.